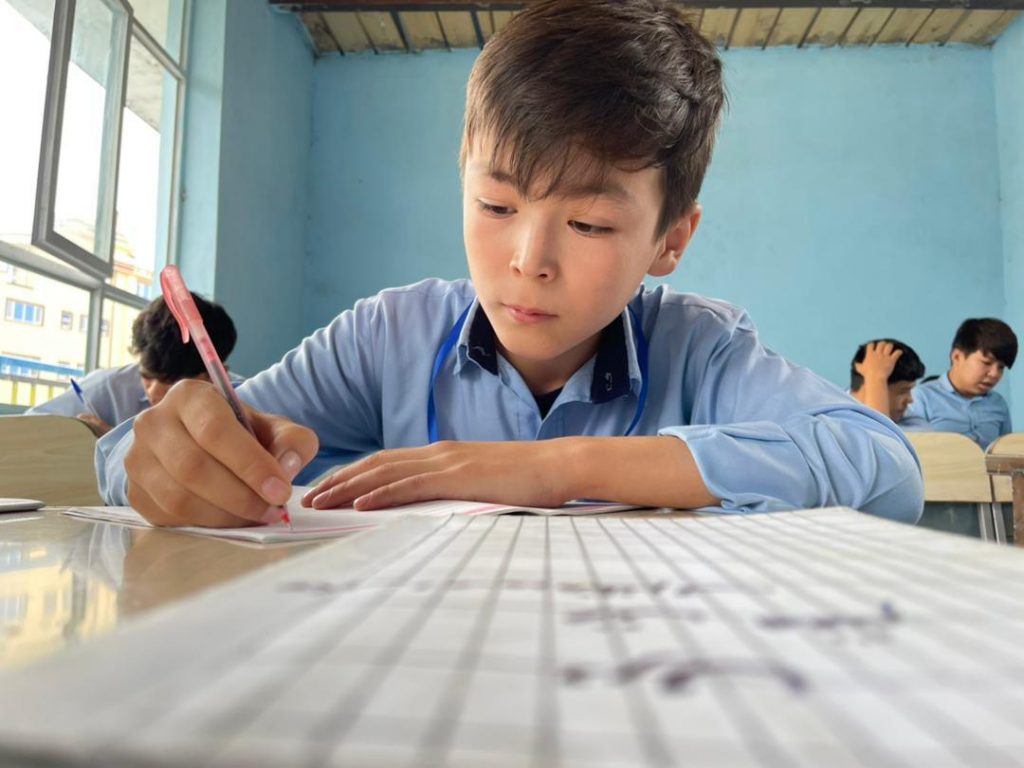 An Orphaned Child Enrolled in LFT-Supported Education Program
Ali Ahmad is a 12-year-old active boy studying at school with the support of the Lady Fatemah Trust in Dasht e Barchi, Kabul, Afghanistan.

He is an orphaned child raised in a poor family. His father was working in the Ministry of Defence of the former Afghan government and was killed while on his way to work.

Ali Ahmad was going to school and an English course when his father was alive but since his father, Mohammad Ali passed away, his family has not been able to support his education due to financial restrictions. “We could not support him because we are 7 people in the family and my two daughters go to university. I can barely support them,” his mother, Razia said.

“It is hard to say that Ahmad always misses his father and I saw him crying in isolation many times. This is heartbreaking and kills me as a mother.”

“We have no income at all. I have three small sons and three daughters two of whom are studying at university. Because of current limitations against women and ban on women’s work, we can’t work outside and therefore it is very difficult to make a living,” she added.

To support her sons and daughters, Razia only does simple home tailoring activities and sews some clothes from her clients in order to get some money.

This job is not always available to Razia rather she happens to receive such work only on some occasions during the year like New Year, Eids, or some wedding parties.

With her highly unfavorable condition, it proved to be almost impossible for Razia to support Ali Ahmad’s education for longer. Fortunately, we learned about the LFT’s winter learning center and referred to the DMCO” its local partner” who then surveyed us and selected Ahmad to join the center in January 2022.

After the end of the winter course, Ahmad got the chance to be enrolled in the school under LFT’s education program. “We heard about the LFT’s program for orphaned children and requested its local partner for enrolling Ali Ahmad.

He is studying in 7th grade in the school since March 2022.
“Since his father’s death, Ahmad was not the boy when his father was alive and had become an isolated person. But, since enjoying the opportunity provided by the LFT, he has transformed and reshaped his life.”

Furthermore, he is very happy and continues his learning with a unique enthusiasm and strong motivation. “We think that he is on the right path toward a better future and are very grateful to LFT for making this happen,” her mother recalled while cheer and excitement appeared on her face.
“If it weren’t for the LFT’s support, we wouldn’t have been able to keep Ahmad at school. The only support we have received in the last two years is from LFT. So this means a lot to us.” Ahmad’s mother, Razia, also narrated that when she sees her son smiling while heading to school, she becomes happy and gets so hopeful. “I observe lots of impacts on Ahmad during these six months: He has become very interested in school and a kind of refreshed. Besides, his hard work on lessons, homework, and fervent zeal for learning shows that getting back to school seats has refurbished his mental status, helping him overcome the daily life hurdles and stresses.