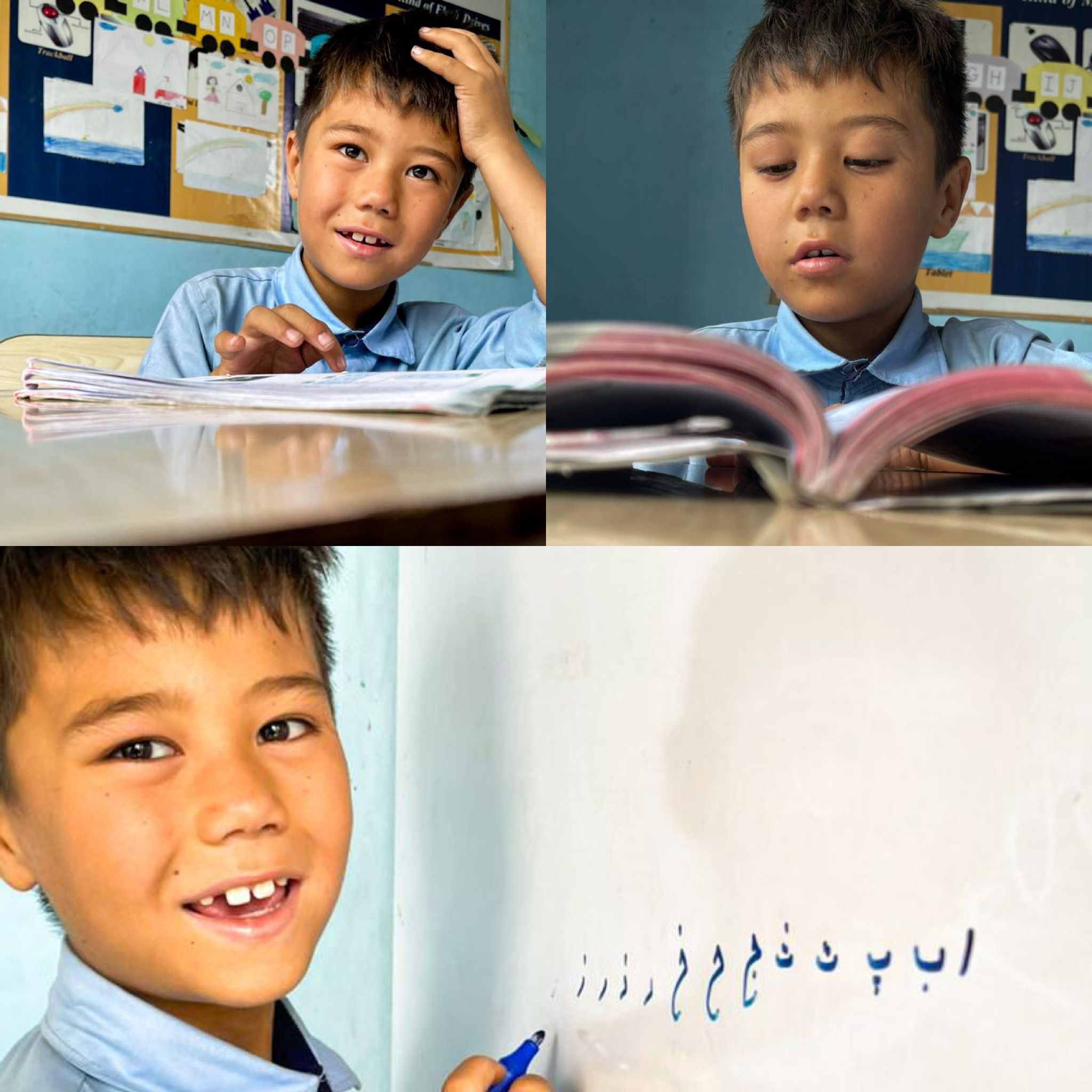 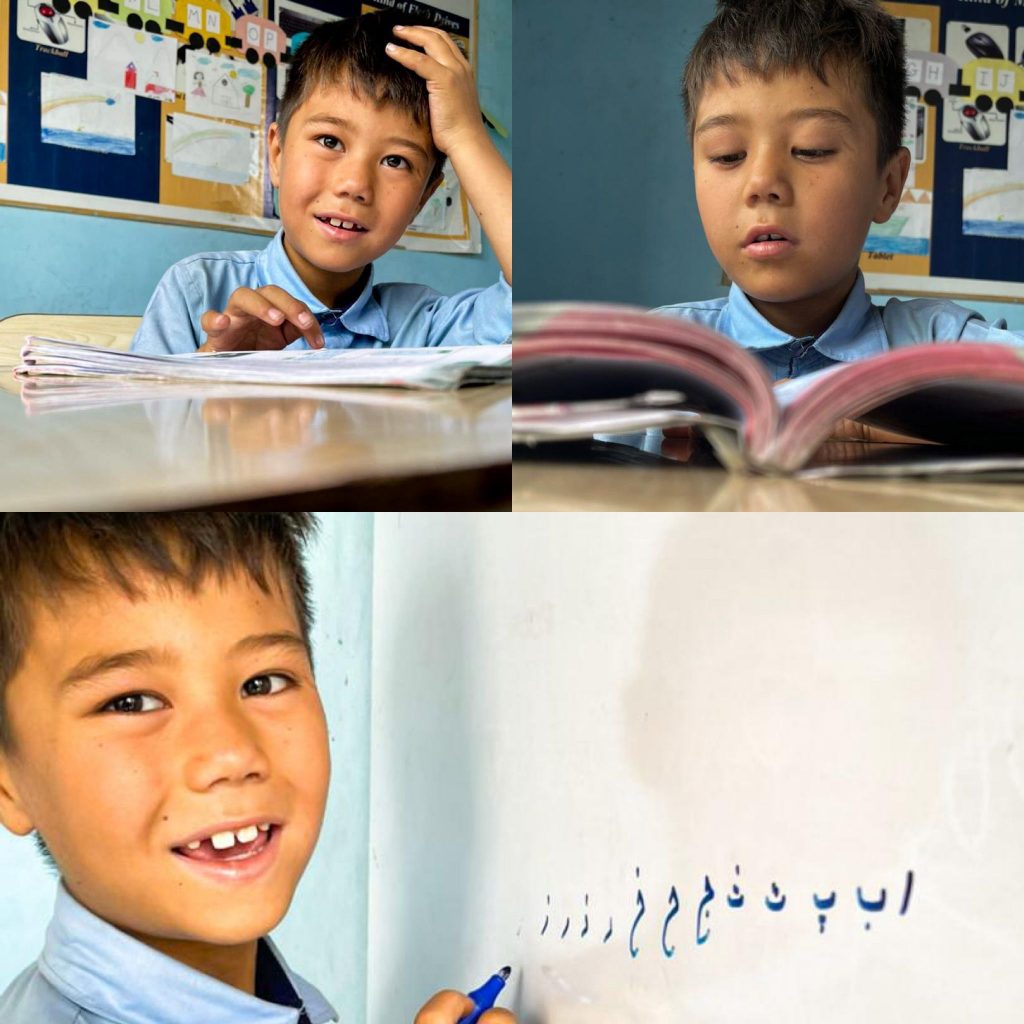 Meet Mahdi – an eight year old orphaned child who is one of sixty children whose education is supported by the patrons of the LFT.

Mahdi is enrolled and continues his education at a private school in Kabul, Afghanistan. He comes from a background and a family with lots of bitter stories. He was only a 7-month-old baby when his mother died from cancer. After his mother’s death, Mahdi’s father, Abdul Ghafar, married another woman and himself emigrated from the country in search of work. He is still missing.

She says “I had no choice but to raise him as an orphan and be a mother to him. I have no husband but have an 11-year-old son with physical disability in addition to Mahdi. Life is really hard for me,”

“We are three at home; I am the sole breadwinner for them. When Mahdi grew up and reached the age of 7, he was asking me to send him to school but we did not have the financial ability to pay his tuition fees. Besides, the public school is far away from us due to which I couldn’t send Mahdi there. Instead, I was looking to find ways to support Mahdi’s education at a private school which, I, fortunately, learned that there is a charity organization that supports orphaned and poor children to go to school,” her mother added.

The LFT-supported education program for orphaned children in Afghanistan allowed Mahdi to start schooling in his nearby area. He enrolled at school in March and is now a first grader along with dozens of other capable and talented children.

His mother has struggled a lot to provide for her two sons’ expenses by working on others’ leek farms and then as a cleaner at a nearby hospital.

Regrettably, she had lost her both jobs due to arriving late on the farm because of the house chores and then the spread of the Covid-19 pandemic due to which the owner of the house in which she had been living had asked her not to go to work because of the fear of contracting the virus.

She adds: “What I can do to barely cover the expenses of my family is to go to the people’s homes for cleaning and washing clothes to get some money which does not suffice our needs. Other than that, I cannot do anything especially when it comes to paying Mahdi’s school expenses and fees.”

“The Lady Fatemah education program has made his schooling possible and inspired him a lot. Since school began, he is changing day by day and regularly attending his class. In the morning, he takes his books and bag and leaves home for school very early and with a special excitement.”

Moreover, this support has also given her mother great mental peace even though she is routinely suffering from financial problems in other areas of her life.

For instance, she said that every day that Mahdi leaves home he asks for 10 Afghani to buy something to eat as others do but I don’t have to give him. This really breaks my heart and makes me feel sad.

Mahdi’s mother further explained that he is making good progress in his lessons and his class performance is satisfactory according to his teachers. “He also loves to go to an English learning center but I cannot afford to pay for it,” Hawa said agonizingly.

“Mahdi does not now feel that he is an orphan among other children at school. This opportunity has made him tremendously happy, enthusiastic, and of course hopeful for his future. This year, he is making friends and is becoming sociable compared to the situation he had last year when he had no one to come to take his hand and open the school door to him,” Hawa indicated.

Hawa also stated that Mahdi’s class experience and interactions with his mates have lead to both his social and emotional development. During the time he is in school, he meets different students and plays with them which makes him mentally and emotionally refreshed and well-off.

“Before going to school, he was always quite, but now he is an active child who learns and gets along very well with his peers, teachers, and family members. Personally, school has changed him a lot. When returning home, he changes his clothes first, takes care of his personal hygiene, and always tries to use his time very usefully.

“We sincerely thank the LFT for assisting with orphaned children’s education. Without this program, it would have been impossible for Mahdi to sit on school chair. May Allah almighty bless you all,” she added.