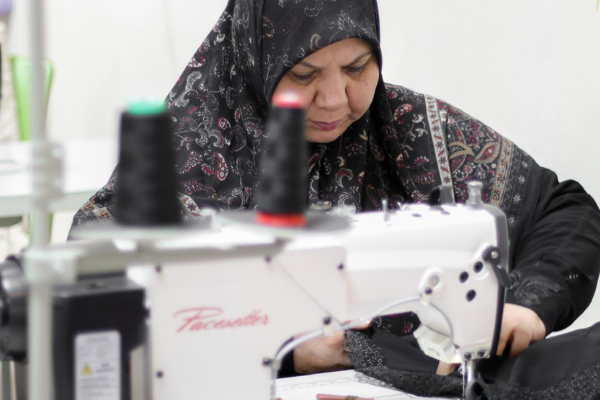 The LFT’s efforts to empower widowed mothers in Karbala and through them enable them and their orphaned children lead a better quality of life is growing from strength to strength with your enduring donations, prayers, and words of encouragement. Over the past few weeks, the mothers have been buzzing with excitement.

Meet two individuals whose lives your generosity has tremendously touched. In Karbala, Amal, a mother who has raised her children single handed for 15 years and Hawraa who was orphaned aged just 10 years old and now a qualified anaesthetist serving the community in Karbala!

These were Amal’s words to describe the Mothernomics project in Karbala Iraq, an opportunity that has completely transformed her outlook on life and the opportunities she has.

On a very unfortunate afternoon in 2006, Amal’s husband, Riad, was complaining of tiredness and suddenly had a heart attack. He was taken to hospital but was announced dead very shortly after arriving there. This truly devastated Amal, she had just moved to Karbala from Baghdad due to the bombings with her family and had four young children to think about.

As a 34 year old widowed mother of four other young children Amal was truly traumatized. She had no other option but to move back in with her family, even though her parents’ house was already too small. Amal ended up staying with her parents for just over two years and then moved to a vacant house that belonged to her in-laws.

During that time, her youngest son, Wissam, who was 13 quit school and worked to provide for his mother and three younger siblings. Amal says that even with Wissam working they could barely afford to eat.

Having joined the Mothernomics programme and 15 years after the death of her husband, Amal and her children are in a much better place. Her children are now older and her two daughters are now married with children of their own.

Her eldest son Wissam recently bought a satuta from the mother’s savings and is himself saving money to get married soon. Her youngest, Mohammed Ridha, who was only two when his father passed away is now in the 9th grade at school and is doing very well.

Amal joined Mothernomics at the beginning of 2021 and was in the first group of mothers that graduated from the new Mothernomics training centre. Now about 6 months after her joining, Amal is doing exceptionally well. She says that ever since she was a young girl, she adored tailoring as her mother was one.

Amal says that when she tailors, her mother’s memory is always on her mind. Joining and progressing through the Mothernomics programme has greatly transformed Amal’s life and those of her children both financially and mentally.

Through the project she has gained many friends and is in a very different mental state than when she first started only a few months ago. Amal says that the project has given her her life back and she feels alive again.

Next, I’d like you to meet Hawraa, who was orphaned at the tender age of 10.

We are always used to dreams coming true only in movies; they inspire us to do better, but very little actually work hard to achieve their dreams especially when life hits us with all sorts of adversities.

At the fragile and tender age of only 10 years old, Hawraa tragically lost her father to a sudden heart attack. That day was just like any other day, the family woke up, ate breakfast and before you know it, Neima, Hawraa’s father had a massive heart attack.

The family had just come back from visiting the grave of their grandmother who had passed away recently, so the family was already in grief.

After the passing of their father the family really struggled, now they had no source of income and struggled to even put food on the table. They solely relied social welfare. The mother has severe joint pain and diabetes which prevents her from moving too much. Rabbab, Hawraa’s mother is also the main caretaker of her father, which also puts a strain on them. But regardless of all these issues in her life, Rabbab promised her late husband that she would do everything she could to ensure her girls completed school, and that is exactly what she did.

Now 11 years later and Hawraa has completed her degree in anaesthesiology. She held her head up high and made sure she made her mom and late father proud. She says ever since her father passed away, she would always look into her mom’s pain-stricken eyes and made a promise to herself that she would work hard and get her mother out of poverty and that is exactly what she did. She is now working in a government hospital and absolutely loves her job. She says she can’t wait to receive her first paycheck so she can give it to her mom.

The story of Hawraa is a story of how lending a small helping hand can really go far with someone who is very ambitious and motivated. The Lady Fatemah Trust offered Hawraa this helping hand through educational sponsorship and she took advantage of any help she could get to achieve her goals. Hawraa is a symbol and a representation of strength of courage in the face of life’s adversities.